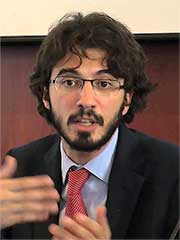 Zaid Al-Ali was born in Madrid in 1977, spent the first ten years of his life in New York and the second ten years in London. His family is from Baghdad, Iraq. At the start of the Iran-Iraq war in 1980, his father (who was Iraq’s ambassador to the United Nations) resigned his position in protest, thereby effectively forcing his entire family into exile until 2003. Zaid graduated with law degrees from King’s College London in 1997, from the Université de Paris I (Panthéon-Sorbonne) in 1999 and from Harvard Law School in 2001. He started his legal career at Shearman & Sterling LLP, where he practiced international commercial and investment arbitration in its Paris and London offices. In February 2005, he moved to the Middle East to work for the United Nations Assistance Mission for Iraq. He was a legal adviser for the Office of Constitutional Support, which was mandated to provide advice to the Iraqi constitutional drafting committee. After the drafting process ended, he worked on parliamentary and judicial reform in Iraq, working closely with legal advisers in key positions in the state to increase parliament’s ability to exercise oversight on the executive branch of government, and to improve the courts’ effectiveness.

By 2010, Zaid had decided that the efforts that he and his Iraqi colleagues were making were not leading to the types of improvements that they had hoped for, and left the United Nations to consider other options. He spent an academic term teaching international trade law in Paris, and was in Baghdad when Tunisian dictator Zine El Abidine Ben Ali was deposed in a popular uprising on 14 January 2011. From that time onwards, Zaid has been focusing on constitutional reform in the Arab region, with a specific focus on Tunisia, Libya, Egypt and Yemen.

Zaid is quoted regularly in the international press on Iraqi developments and on constitutional reform issues in the Arab region, including in the New York Times, the Financial Times, the BBC, National Public Radio, the Guardian, the Daily Telegraph, amongst many others. He has contributed a large number of chapters to edited volumes on constitutional law and on reform efforts in the Middle East. He publishes his own commentary pieces on Iraqi and Arab developments mainly in Foreign Policy, Opendemocracy and Al-Hayat. He has lectured and spoken on these same issues at Harvard University, the London School of Economics, Chatham House, Edinburgh University, the University of Chicago, the Chicago Council on Global Affairs, the Carnegie Council for Ethics in International Affairs, New York University, amongst many others.

Zaid Al-Ali has been practicing law since 1999, specializing in international commercial arbitration and comparative constitutional law.

Author Zaid Al-Ali and his wife Rouba Beydoun during a dust storm in Iraq in 2010.

He has law degrees from Harvard Law School, the Université de Paris I (Sorbonne), and King’s College London. From 2005 to 2010, he was a legal adviser to the United Nations focusing on constitutional, parliamentary, and judicial reform in Iraq. Since the beginning of 2011, he has been working on constitutional reform throughout the Arab region, in particular in Tunisia, Libya, and Egypt. He has published widely on Iraq and on constitutional law.

If you’d like to receive occasional email updates please fill in the fields below.